Fumigation plays a major role in insect pest elimination in stored products​ SUCH AS RICE, CORN, GRAINS
Call Us Nationwide at 0927.365.2947

FUMIGATION FOR STORED PRODUCTS AND GRAINS

Fumigation plays a major role in insect pest elimination in stored products. Currently, phosphine (from metal phosphide preparations, cylinderized formulations and on-site generators) and methyl bromide (available in cylinders and metal cans) are the two common fumigants used for stored-product protection world over.
​
Fumigants are designed to enter cracks, crevices, and other areas where insect may occur. The constraints in the use of fumigants to treat stored products include consideration of the chemical residues which they may leave in the treated stored products and affect the quality of grain, germinability, and seedling viability. The term fumigant is derived from fumus or smoke of chemical which at a required temperature and pressure can exist in the gaseous state in sufficient concentration to be lethal to a given pest organism. In this regard, phosphine has considerable advantages and is certainly to be preferred to MB for stored products. In the bulk storage system, ethylene oxide is commonly used and accepted as substitute of carbon disulfide for fumigation of grain and seeds. Ethylene oxide is a colorless, odorless liquid at low temperatures, but it can vaporize rapidly at suitable temperature.

Pests of grain and other stored products have been around for a long time. Recorded control efforts go back as far as 2500 B.C. when the Sumerians used sulfur compounds to protect their crops from insects. Such fumigants and other alternative methods are still used today to rid stored products of insects

“Knowing the pest is half the battle in controlling it,” said Insects Expert in a presentation at the  Food Safety Symposium. Pests have varying food preferences and habitats; differing life cycles, feeding stages, and adult lifespans; and dissimilar temperature thresholds and abilities for flight and package penetration, experts said, all of which are important in selecting the best method of control, and in reducing conducive conditions by which the insects live and breed.

Once beetles, weevils, or moths infest stored products, they can be difficult to eliminate. The most traditional process of elimination is fumigation, but there are also non-chemical and natural alternatives.

Fumigants are specialized pesticides that act as a gas to kill a pest, explained Tom Phillips, professor of entomology at Kansas State University. All fumigants are toxic, and proper safety precautions must be taken by applicators to manage the risk.

In the U.S., there are three synthetic gases that are registered for use in food or food-related structures: Methyl bromide (which has very limited uses today), hydrogen phosphide, and sulfuryl fluoride. Alternatives to fumigants include heat, controlled atmosphere, insect growth regulators, and biological controls such as predators, parasitoids, and pathogens. Following are overviews of eacH:

Methyl Bromide. Prior to the 1990s, methyl bromide was the most common fumigant used in flour mills, and also was used for a variety of other fumigations, including that of soil because of its high toxicity and relatively quick action. Today, the chemical has just about disappeared as a fumigant, having been identified as an ozone-depleting substance by the international agreement of the 1989 Montreal Protocol. The fumigant was scheduled for elimination by 2005, but the act included an allowance for short-term critical use exemptions, which number just two to three user groups now, and also a standing exemption for international quarantine and pre-shipment.

Hydrogen Phosphide (Phosphine). Today, Phillips said, “Phosphine gas is, without a doubt, the most common fumigant used on grains, cereal grains, and oil seeds worldwide.” Because the gas is so lightweight, it disperses well through the grain and dissolves easily into the air, he said. The fumigant also is fairly easy and safe for professional application because it generally is applied as a solid, which reacts with warm temperature and moisture in the air to gradually release the gas. Thus, there is less risk because the gas is not generated immediately. However, it is corrosive to some metals and can damage electrical and electronic systems, so must be used with care. Additionally, several species and local pest populations have developed resistance to phosphine gas.

Sulfuryl Fluoride. Sulfuryl flouride has been used by the pest control industry for more than 50 years, but until about eight years ago, it was only labeled for structural fumigation of drywood termites and other wood-boring insects. Today, the fumigant also is registered and labeled for grain and food use. Research is showing that sulfuryl flouride will kill phosphine-resistant insects, thus, it is providing a beneficial alternative for that as well as methyl bromide.

Heat. Because high heat will kill insects, stored product pests can be killed by raising the temperature to 122°F and holding it there for several hours. Heat is generally not applied to bulk-stored commodities or value-added products because of risk of damage, but it is growing in use in buildings. However, because the insects will hide or move to cooler locations, it is critical that the temperatbure penetrate all the way through the structure. This can be difficult, particularly if pests have burrowed down into gaps in a concrete floor laid on soil. Nevertheless, heat is used successfully for many mills and warehouses by applicators who know the techniques for best practices. Freezing temperatures also can be very effective and safe for many products, but are often less practical for large quantities as the core must reach 0°F.

Controlled Atmosphere. Radically increasing carbon dioxide and/or decreasing oxygen in the air will kill just about any insect that is properly treated. Air is naturally composed of much less than one percent of carbon dioxide; if this composition is raised to 10 to 30 percent, it will kill over a period of several days; so to kill the insects, the CO2 is raised to 60 to 80 percent and held for a period of time based on the susceptibility of the species and life stages present. Decreasing oxygen will suffocate the insects. This is done by displacing the oxygen with an inert gas, such as nitrogen, however this is very difficult to do in buildings because of size and the fact that very few are gas-tight. Low vacuum, which can bring the O2 concentration to a killing one to two percent, can be applied effectively to small loads.

Biological Controls. This method uses naturally occurring beneficial insects to kill destructive insects. For example, parasitic wasps will sting an Indian meal moth larva to paralyze it and then lay eggs on it. When the eggs hatch, they feed on the paralyzed larva. When initially used, regulators designated the beneficial insects as an adulterant, but after review, the designation was revised to be considered a pesticide and exempted from the requirement of a residue tolerance; however, any such insects would still have to be considered with the tolerance for insect fragments.

Technologist Pest Control Cebu fumigation services prevent the spread of pests and minimize the risk of damage to your goods.

We perform fumigation services – including the treatment of cargoes loaded into sea-going vessels, barges and containers – in ports and logistics centers in Cebu. Accordingly, these services comply with stringent national and international legislation, with best practice and with globally agreed quality and safety standards.

Our fumigation and pest management services – which are effective and reliable at all stages of the supply chain – include:

If you want to minimize your trade risks through worldwide protection of your agricultural commodities, contact Technologist Pest Control Cebu now.

We have carved a niche for ourselves in this specialized fumigation service in Iloilo by rendering highly effective Wooden Pallets Fumigation Services. By making use of high grade fumigant chemicals, our skilled professionals r treat the area to eliminate any hidden pest and bugs and their eggs. 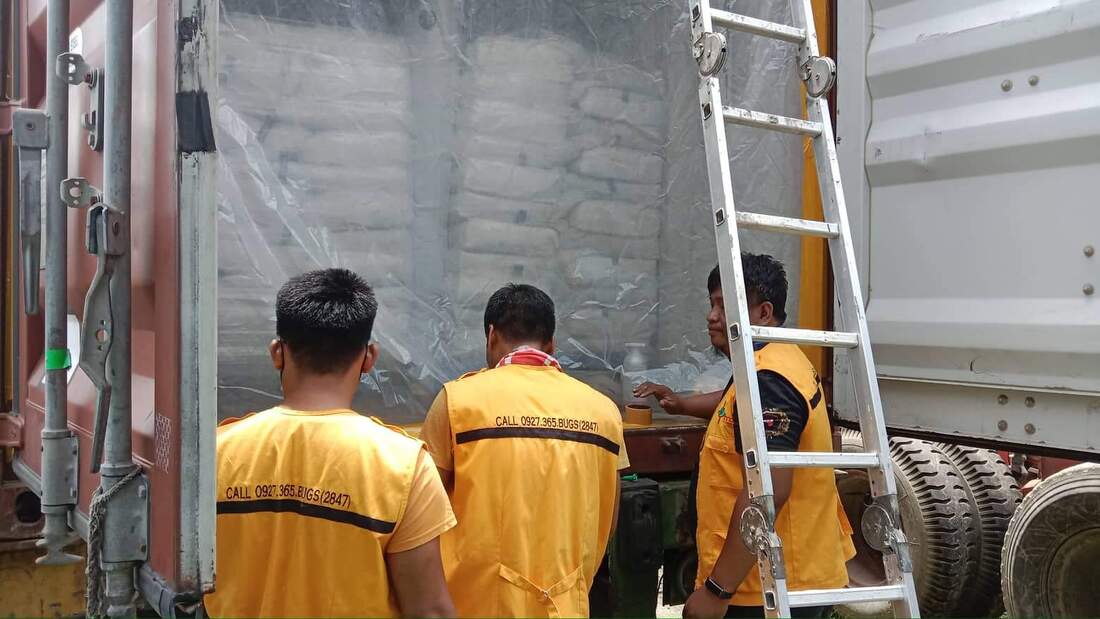